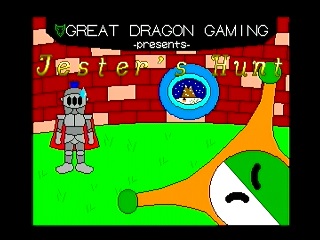 Jester's Hunt is a collect-a-thon adventure inspired by Banjo-Kazooie, and was released for RPG Maker 1 back in August 2003. Also, I made it. Is it weird for me to review my own game? Maybe. But after what I did to the game in my recent let's play of it, it's probably safe to say that this is not going to be a biased review.

The story is probably the least important aspect of a game like this, so let's go ahead and get that out of the way. You play as Mr. Knight, a clownophobic knight who was hired by a jester named Jester to find his missing trophies, which Jester claims he earned by being the best jester. ...And that's the main plot in a nutshell. There is a rather interesting subplot involving an alien named Zone and a mystery oppressor, though. It's nothing amazing, but it's more plot than what's found in your average collect-a-thon. 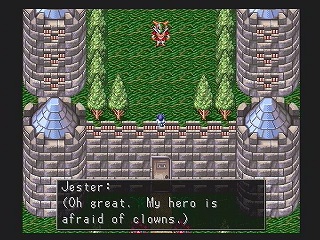 Naturally, a game like this has its fair share of humor. Being a clownophobe, many of Mr. Knight's interactions with Jester involves being freaked out, and there is a lot of fourth wall breakage in the game. Some of the other humor, though, falls a little flat, such as the fact that people can't smell in their dreams because the Sand Man's piano has a sour note. But, hey, there's a talking monkey in the game! That's pretty funny, right?

I've used the phrase "collect-a-thon" a few times in this review, already. It's been a while since those types of games were popular, so let me explain. You see, Jester's Hunt is an open world game in which you travel through six expansive levels (and the main area connecting these levels), with your main goal being to find as many of Jester's trophies as you can. These trophies are needed to unlock later levels in the game, and you aquire them by completing a variety of objectives, such as winning in a boat race, completing a treasure hunt, disguising yourself as an enemy, and defeating bosses. While there are 34 trophies in the game, only 22 are needed to reach the end. Those persistant enough to locate the extra 12 can find a very special bonus waiting for them deep within Jester's castle.

Along with trophies, there are also regular tokens that you use to earn new attacks and abilities, and special "?" tokens that increase your maximum HP and MP, if you can find them. 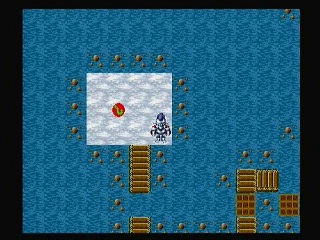 The abilities in the game, much like the trophies, are required if you want to progress through the game, and include cutting down bushes, using spring pads, and breathing underwater. With the exception of the hub world, each level in the game has one ability to learn. And while most of them are kinda interesting, there are a couple that I feel have missed their potential. For example, you can learn how to use hover pads, which allows you to walk in the air. And by "walk in the air", I mean you step on the pad and automatically walk to the next platform.

Also, while it is technically impressive for a game like this to exist on RPG Maker 1, the open world isn't quite as open as one would expect from a collect-a-thon. For example, it's actually required that you defeat the first level's boss before you can accomplish anything else, and 3 of the 4 trophies in the last level can only be aquired in a specific order. In fact, with the exception of the fourth level, every level in the game has at least one trophy that requires the completion of a separate task within the same level.

Perhaps the worst offender of linearity involves the second and third levels in the game, Sea Land and Mt. Snow, respectively. It's actually possible to skip Sea Land and go straight to Mt. Snow, which sounds like a nice feature. However, if you do skip to Mt. Snow, you will not be able to find enough tokens to earn Mt. Snow's ability until you collect more tokens from Sea Land. Without that ability, you will only be able to collect one trophy in the level, making the detour to Mt. Snow rather pointless.

Along with that, there are various objectives in the game that require you return after learning an ability in a later level. However, this isn't so bad, as it feels more like a proper gameplay element, and it's usually pretty clear when you lack the proper ability.

Along with Jester's Hunt's six abilities, there are also 12 attacks you can learn to make battling easier. Battling in the game involves bumping into an enemy and choosing from a selection of attacks specific to each enemy. If the enemy survives, bumping into the enemy again allows it to attack. Admittedly, that doesn't sound very elaborate. But RPG Maker 1 isn't a very powerful game creation tool (a fact to keep in mind during some of the game's objectives), so battling in the game can't really get much fancier than that. But what the battle system lacks in fancy-pants action, it makes up for in variety.

While it isn't usually necessary to fight anything, the attacks the game provides you with will at least have you trying things out. Your main attack is "Blast", which you simply use to damage enemies. Other attacks include "Zap!", which causes light damage with the potential to stun the enemy, and "Great Scare", which has a chance of killing the enemy in one shot. And while status attacks in most RPGs tend to miss all the time, in this game, status attacks actually work. In fact, almost all the attacks in this game are worth using, and you rarely have to worry about wasting MP. 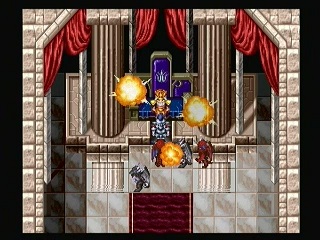 And then we come to the bosses. With the exception of the 5th boss and part of the final battle, most of the bosses require figuring out the boss's gimmick to cause damage. The boss strategies are a bit of a mixed bag, and range from trying not to get targeted by the boss's energy blast, to walking around until the boss counts down from 5 to 2 and then standing in place until the boss walks up to you so you can punch him. Yeah, some of the boss weaknesses are a little too specific. And once you figure out those weaknesses, it becomes pretty easy to get through the fights without taking damage. Especially in the case of the final boss -- as long as you go in with enough health, it is literally impossible to lose.

I'm not gonna lie: at times, this game is not very interesting to look at. Some locations are better than others (the first level comes to mind), but other locations in the game are rather lacking in detail. Heck, one level in the game is almost nothing but clouds! 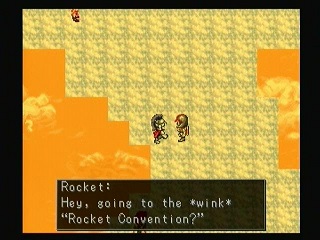 Some of the levels also tend to be a bit on the large side, and there will be times when all you're doing is just travelling to your next location. There are a couple of teleport pads in each level for quick travel, but another one or two would've been nice. Thankfully, the paths through each level are relatively straightforward, so you probably won't have to worry about getting lost. Or so I assume. Being that this is my game, it may just be that I already know where everything is.

The game is also not devoid of glitches. For example, early on in the game, if you skip the attack shop and go straight to the ability shop, you get the shop tutorial and are sent out the door... in front of the attack shop. (What's frustrating is that I thought I fixed that glitch. Well, as it turns out, I did fix it, but I forgot to add the trigger for the fix.) Also, one of the bigger glitches in the game comes from an enemy later on. It has a couple of joke attacks that don't damage you. But after you defeat it, it drops health for you, allowing you to exceed your HP cap!

Overall, the game just feels rushed. And that's because it is. I had two months to finish it in time for a contest, so I didn't really have time to go through and polish things up. Admittedly, I'm probably being a little harsh towards this game, considering the time constraints I had. But I've given some harsh reviews for other RPG Maker games, and I want to be fair and dock my game points where it needs docked. If I were using points, that is. 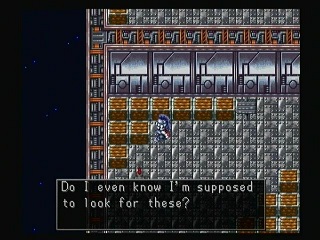 Now, don't get me wrong. Jester's Hunt is not a bad game. It is impressive for being what it is, and you can see how much of an influence Banjo-Kazooie had on the game. Jester's Hunt is only a few hours long, so if you have a copy of RPG Maker 1 (required because it holds the game's resources), I really do believe it's worth a playthrough.

I think what bothers me most about this game is that I know I could do better. This was the only good game I ever finished, and it holds a special place in my heart. Given the chance, I wouldn't mind going back and recreating the game from scratch. But until I get the motivation to do that, you're going to have to settle for Jester's Hunt, my impressive, but relatively average game. 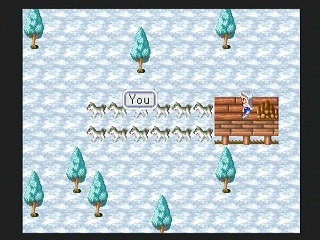