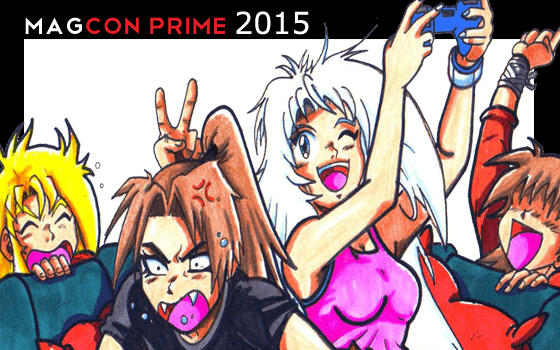 This is your stop for all things MagCon Prime 2015!

We will be live-streaming via Google Hangout during the times indicated on this schedule. You will be able to interact with us on our wonderful vacation!

More after the jump.

Videogame Decathlon - streaming
The Videogame Decathlon is back once again this year with 10 brand-new challenges for our attendees to brawl over. There are plenty of prizes to win as well as a special prize for the Decathlon Grand Champion, as always. Hosted by Ixzion and Lantis, even though he doesn't know what the games are.

Group Let's Play/Let's Race - streaming
We are going to do a live Let's Versus at the convention. Super Smash Bros. for Wii U!

Random Skits - non-streamed
You know we're going to have some skits, right?

Magic the Gathering Booster Draft Tournament - attendee-only
Are you a giant nerd? Of course you are, you're here! We play PLENTY of MTG at MagCon, so don't be the one who says "I shoulda brought my cards"!

Various Board/Card Games - attendee-only
We have plenty of multi-player board and card games to keep us busy during the off hours of the convention, including games like Munchkin, Love Letter, Boss Monster and Cards Against Humanity.

Dinner and a Movie- attendee-only
As has become tradition, we will once again watch a movie and dine together on the last night of the convention. This year's selection: Blazing Saddles!