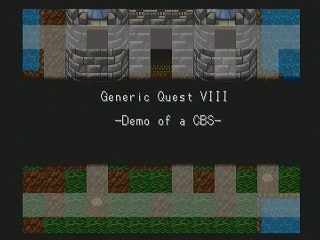 Since the battle system is the main point of the game, I'm not going to wait until the end of the review to talk about it. Let's dive right in.

Every battle in the game pits your two party members against one single enemy. Typically, you get your turns, with the enemy following with its turn. Once you choose your character's action, it is immediately carried out, and then it's on to the next character's turn. Sometimes, though, the battle begins with an ambush or pre-emptive, resulting in either the enemy or your lead party member, respectively, getting in a free hit. 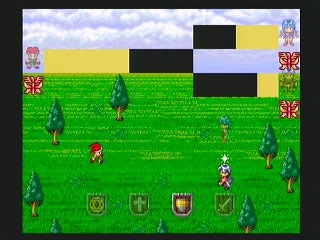 Your options during battle are standard RPG fare, including using magic and items, though there's also an option to skip your turn. But it's just a leftover function from game testing, so you really have no reason to use it, yourself.

Each of your characters has a max of 4HP, and all the enemies have a max of 7HP. This doesn't sound like a lot, but RPG Maker 1 makes it hard to keep track of larger amounts (at least in a custom battle system). Thankfully, the battle system is built around this restriction. Physical attacks cause 1 damage per hit, with a chance of going critical for double damage, or missing altogether. Items heal either your HP or MP to full recovery. When you defend, you block all physical attacks, which sounds useful, but I honestly didn't find many occasions to use it. And then we come to magic.

Each of your characters has two levels of magic spells, with each character having their own dedicated element. Level 1 spells, by default, cause one damage and cost 1MP. Level 2 spells cause two damage and cost 3MP. Each of your characters has a max of 6MP. Once again, these low numbers are RPG Maker 1's fault, and once again, Lantis has worked around it. You see, even if you have less than 3MP, you can still cast a Level 2 spell. This is called "overcasting", and it's a very useful feature. The best time to use it is if you're down to your last MP. As long as you've got one cast left, might as well make it the big one, right? When it comes to custom battle systems, I feel that they have to provide something special that the creation tool doesn't provide by default, or else it's just wasted effort. Overcasting is that something special. 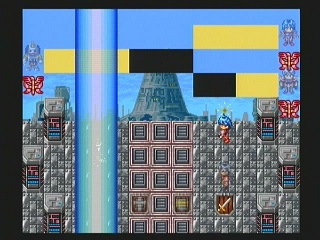 Because of this, I found regular attacks to be a lot more useful than Level 1 spells, because they cause the same amount of damage, but without the MP cost. Yeah, regular attacks have a chance at missing, but they also have a chance of going critical. Typically the only time I found myself using a Level 1 spell was if the enemy was down to 1HP and I didn't want to risk missing, which would result in the enemy getting in one last attack. Really, I found much more use for Level 2 spells, despite their high MP cost.

I'm going to tell you right here: Generic Quest 8 isn't meant to be a full-fledged RPG. It's more of a tech demo than anything else, and the game tells you that up front. (See title screen.) The custom battle system takes up so much space on those old PlayStation memory cards, a full-fledged RPG just wouldn't have been practicable. As such, the game is very short-- featuring your home, a world map, and three small dungeons. 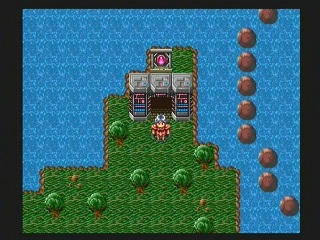 Each location in the game only features one enemy type, but thankfully the enemies are at least a little interesting. In particular are the mermaids, which can heal their HP to max; and robots, which have a spell that diminishes one of your characters' magic completely.

Because of RPG Maker 1's limitations, Lantis could not provide you with level-ups, equipment, or any sort of stat growth. As incentive to actually go out and battle some enemies, there are a couple points where you need to buy a particular item in order to progress through the game, using money aquired through battling.

By default, RPG Maker 1's Game Over is only activated when you lose in the default battle system. Since Lantis is using his own battle system, he had to use his own Game Over. Unfortunately, there's no easy way to keep track of items you've used up in a custom battle system, so if you wasted your items trying to survive that last battle, you're not getting them back. Knowing that people would find this frustrating, Lantis decided that the best thing to do would be to force people to reload their save, by making them start the game completely over if they didn't. Considering the importance of money in the game, I'd much rather lose a few items than reload my save with none of the money I had just aquired.

Because of this annoyance, Lantis actually recommends playing the game in "Test Play", so that you can much more quickly reload the game if you die. Test Play also gives you the "Quick Save" option, which allows you to make a temporary save anywhere you want, though it's recommended against quick-saving in the middle of a battle. Unfortunately, the disadvantage of playing the game in Test Play is that you'll have to give the file name of the second half of the game the same name as the first half, or else your saves and quicksaves will ignore the second half. Another one of them dang RPG Maker 1 limitations.

Yes, this game does have a plot. Not much of a plot, but that's sorta the point. As the title of the game implies, Generic Quest 8 mainly makes fun of various RPG tropes, such as the fact that people are more interesting in making money, rather than giving you the items you need to save their sorry behinds. And while I feel there was some wasted potential with some of the humor, there were at least a few gags that gave me a good chuckle. 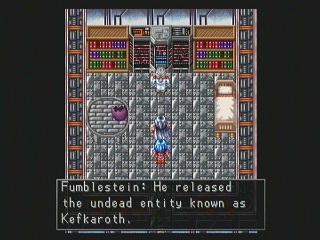 Basically, all you need to know about the story itself is that a pirate accidentally released some ultimate evil that wants to destroy the world, and it's your job as the silent protagonist and his straight man-- er, woman, to seal the evil from whence it came.

Overall, the game functions as it should. There are a couple little glitches, and plenty of typos, but otherwise, the game is very much playable.

Did I mention there were typos? 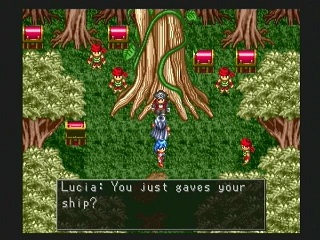 Lantis opted not to use any custom graphics, so the battle system isn't the prettiest thing you've ever seen, but it works. Likewise, the dungeons and world map don't have a lot going for them, visually. Premade forest, aside.

There are, at least, a couple little secrets in the game, if you can find them. And the game comes with both instructions and a walkthrough for those who would like the extra help.

Overall, Generic Quest 8 is interesting mainly as a curiosity. Despite the complexity of the battle system (at least for RPG Maker 1), there isn't really a lot to hold your attention. But again, that's pretty much the point. It's not meant to be taken seriously. Lantis is just showing off.

Admittedly, if you're not familiar with RPG Maker 1's limitations, the battle system is going to feel archaic. Which it is. But that's only because, well, it's RPG Maker 1. 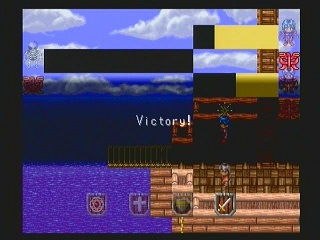