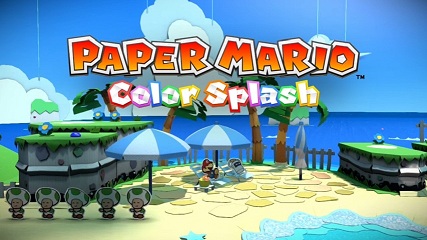 Okay, so I know not a lot of people are going to see this, but I wanted to give my thoughts on Paper Mario: Color Splash at this year's E3.

Now, in order to discuss Color Splash, I'm also going to be talking a lot about the other games in the Paper Mario series, so for the sake of transparancy, I'm going to say it right now: I'm actually kinda interested in this game. I mean, I do have some concerns about this game, but otherwise, I'm willing to give this game a chance.

Now, it goes without saying that when this game was initially revealed a few months ago, there was quite a bit of backlash. After the critical failure of Paper Mario: Sticker Star, people thought Nintendo would learn from their mistake and make a proper sequel to Paper Mario: The Thousand-Year Door. 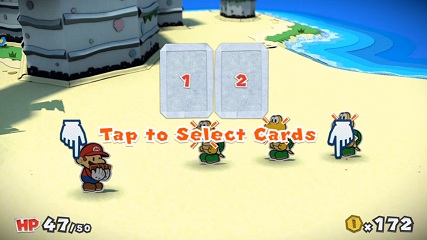 Now at this point, I'd like to address all those people who call out the haters by saying, "Don't hate Nintendo for trying something different. If they made another Thousand-Year Door, you'd just complain about them not trying anything new. If you want the old games, just play the old games." (Pretend I was saying that in a condescending voice.)

Now, I'm fine with Nintendo trying something new. But Sticker Star, compared to The Thousand-Year Door, was not a very impessive game. In fact, they basically stripped down everything that made Thousand-Year Door such an enjoyable experience. The story was barely there, all the interesting characters were replaced with generic Toads... Bowser, one of the funniest and most enjoyable characters in Paper Mario, had no dialogue in Sticker Star. You no longer had partners in battle; instead, you always fought solo. And the badge system from the first two games was replaced with stickers. 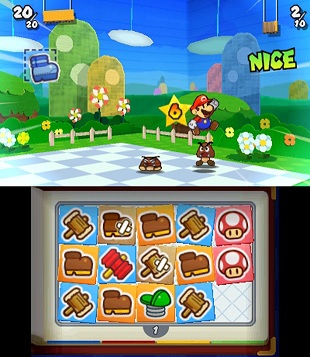 Stickers are your only means of attack. In fact, your basic jump and hammer attacks are stickers too, so you can't use them for free anymore. Which is dumb, because you can still use your jump and hammer for free outside of battle. Also, the stickers were a rather poor replacement for the badge system in the first two games. The stickers in Sticker Star gave you new attacks, and that was about it. The badge system in the first two Paper Mario games gave you new attacks, as well, but they also buffed Mario's strength and defense, they could make Mario immune to things like poison, they could give Mario an electric charge so that enemies who touched him took damage, and the list goes on. 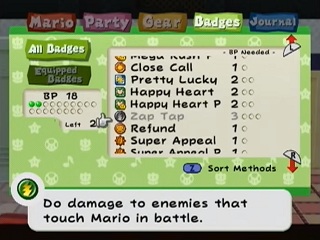 But for me, the biggest flaw of all was that you did not recieve experience points for battling. Fighting battles did not make you stronger, they only drained your resources. And the only reward for fighting those battles was money, which was pretty much only used to recover those resources. So battling was pretty pointless.

Now, I should mention that I did not play Sticker Star, myself. I have a couple friends who played it, and as soon as they told me how much a waste of time battles were, I decided not to buy it. And at this point I'd like to address the fans who are all "You shouldn't judge a game by what you hear, you should try it yourself." (There's that condescending voice, again.) Are you kidding me? That's how EVERYONE decides whether to buy a game or not. Are you seriously telling me that you blindly buy video games without learning about them first? Do you just have a lot of money lying around? (And if so, can I have some? I have a Patreon account.)

Anyway, my point is, Sticker Star did not sound fun, so I found no reason to get it.

Paper Mario: Color Splash, on the other hand, does look like it'll be fun. Just as Thousand-year Door was a Paper Mario sequel done well, Color Splash seems to be a Sticker Star sequel done well... to an extent. Yeah, the game still doesn't have a creative cast of characters. But for what it's worth, the Toads in this game seem to have more personality. And from what I understand, each location in the game has more going on than in Sticker Star. So exploration should be fun and the dialogue should be entertaining. 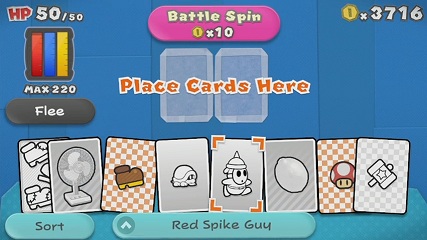 Now I'll admit, the selection of cards do look interesting. Are they a proper replacement for the old badge system? I'm not sure. At the very least, I do like the idea of the enemy cards, even if they lack the personality (or permanancy) of your partners from earlier games. Question is, will the card system be fun, or will it just be tedious? Again, I'm not sure. You see, when you use your playing cards, you use paint to power them up. And I was concerned that I'd always be worrying about running out of paint. The good news is, you don't actually HAVE to use paint to use your cards. You can flick them into battle without charging them up. So if you want to conserve your paint, go ahead.

Still, though, what about your inventory? It is to my understanding that, although unlikely, it IS possible to run out of stickers in Sticker Star. And considering that even your basic attacks require stickers, running out of stickers sounds like a very bad thing. Will this also be an issue in Color Splash? I mentioned at the start that I had a few concerns with this game, and that is one of those concerns.

Another concern is in regards to the "Thing Items". Thing Items are essentially super-powered attacks that you can find while exploring, and they sound pretty neat. But one of the things I heard about Sticker Star is that the bosses cannot be beaten without having the correct Thing Item. Which means if you don't have that Thing Item, you're going to lose.

And it looks like Color Splash is going to be the same way. At E3, they showed a boss fight against Morton Jr., and at first the fight looked pretty fun. You had to use shy guys to get rid of the pedastal Morton was sitting on, so that you could attack him. That's inventive! And if that was the main strategy of the fight, I'd be happy. But then Morton lit his hammer on fire, and almost killed Mario in one hit. 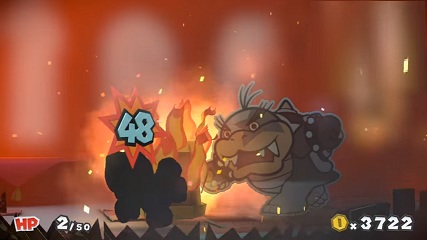 The only way to survive at that point is to use a Thing Item, in this case a fire extinguisher, to put his hammer out. But what if you missed the fire extinguisher? What if you wasted it in an earlier battle? I'm fine with Thing Items being used to make bosses easier, but it should still be possible to fight them without it. Getting stuck in a boss fight you can't win does not sound fun, so hopefully they fix this issue.

Lastly, there's the question of experience points. This game is an RPG. I know they say it isn't, but if you have turn-based battles, it's an RPG. And the thing about turn-based battles is, they interrupt the flow of the game. So in order for them to be worth my time, I need to get stronger from them. So, does this game have experience points? Well, kinda. After battle, the enemy you defeated drops paint. That paint is actually your experience points, and they're added to an experience meter in the upper-left corner of the screen. 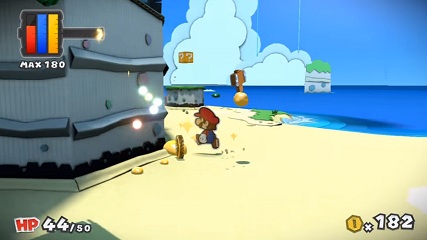 When you get enough experience points, your "MAX" paint level increases and you can hold more paint. So at least that's something. (Edit: Yes, you can also find paint while exploring, but that paint only refills your reserve. Only the paint recieved from battle fills your experience meter.) Still, though, I'd also like to get stronger. If I get really far in the game, and decide to go back to an earlier area, I want to feel stronger than I was during my first visit. Even if experience points don't make you stronger, I hope that there's another way to get stronger. For example, finding stronger cards. I mean, even in the first two Paper Mario games, you did not get stronger from battling; you got stronger by finding better weapons.

So those are my three concerns with this game. I don't want to run out of playing cards, I don't want to get stuck in a boss fight I can't win because I didn't bring the correct item, and I DO want to get stronger as the game goes on. If Nintendo can address at least two of those issues, I'll consider getting Color Splash. 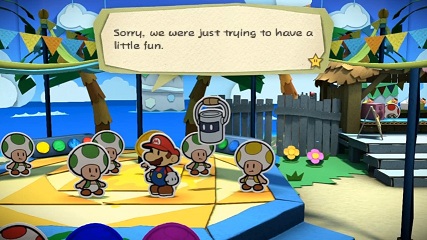 Now before I end this, I would like to comment on how strange it is that Nintendo decided to make Sticker Star 2. Did they not see all the hate Sticker Star got?

Well, apparently, Sticker Star sold well. In fact, it sold better than The Thousand-Year Door. So Nintendo assumed that what people want is more Sticker Star. What Nintendo is forgetting is that Sticker Star released on the 3DS, which is one of Nintendo's most successful consoles. On the other hand, The Thousand-Year Door released on the GameCube, which was nowhere near as successful. This, on top of the fact that Sticker Star had a lot of hype because it was a new Paper Mario game, OF COURSE it sold better. But that doesn't mean that people liked it more. Again, have you seen the hate generated by Sticker Star?

Also, another reason I heard why Nintendo has changed the Paper Mario series so drastically is because of the Mario & Luigi series. Apparently, Nintendo decided that there didn't need to be two separate Mario RPG series at the same time. I disagree. I actually thought that was pretty cool. It was made even more cool when they cossed over in Mario & Luigi: Paper Jam. More importantly, if you didn't like one series, maybe you'd like the other. Myself, I personally do not like the Mario & Luigi series, because charging up your Special Attacks all the time takes too long and makes boss battles feel slow. So Paper Mario was my go-to series for a Mario RPG. But even though I'm interested in Color Splash, the fact that the Paper Mario series has gone from an epic RPG packed with content, to a simpler game with a single gimmick, is rather depressing. I no longer have a go-to Mario RPG, because Nintendo is trying to turn Paper Mario into something else. Hopefully someday Nintendo will release The Thousand-Year Door on the Virtual Console. Maybe its sales will show that there is still a market for that kind of Mario RPG. 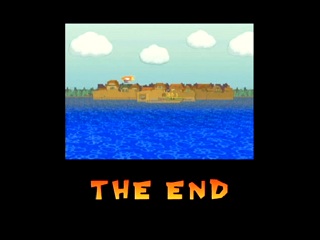