Okay, first, the good stuff. It is point-and-click to an extent. You can scroll through the map and place objects and enemies. You can also modify how many levels per world (with an option to have the game be anywhere from 7-24 levels, though it's still gotta be 7 worlds and worlds can't have more than four levels each). Each map can be up to 16 screens in length or height, and once you reach that 16th screen, the map actually loops (the prospect of an infinite drop kinda sounds fun to make). You can also do weird stuff, like altering jump heights for both the player and enemies, making someone a longer floater than Peach, place boss characters like Mouser and Wart in the middle of a level, and alter boss health (up to 256 hits!) and enemy projectiles. The only thing you can't really do with this tool is use your own graphics and music. 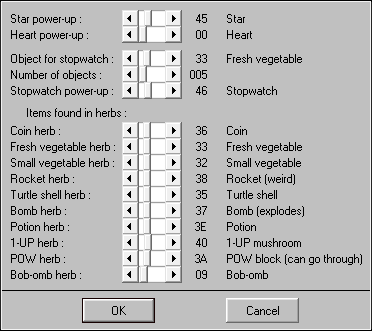 This stuff is pretty easy to find and use. Open up the proper menu, and drag some sliders. Unfortunately, the ease of use stops there, and the difficulty begins the moment you start the program up. You know how in most computer programs, you start it up, click File > Open, and browse a menu full of files for the one you want? Well, in this one, you start it up and...

"Enter the filename and path:"

...WTF, mates? Okay, so apparently I gotta type in C:itishere.ext. No browsing to the file the easy way. And this thing was made in 2002. And after you open the file, the first thing you see is confusion. A couple boxes on the left telling object and enemy number, the map in the middle, and a whole bunch of checkboxes on the right, half of which are marked "Undefined" because they literally serve no known purpose. And there's a box at the bottom of the window with a bunch of 0s, and I have no idea what purpose it serves. 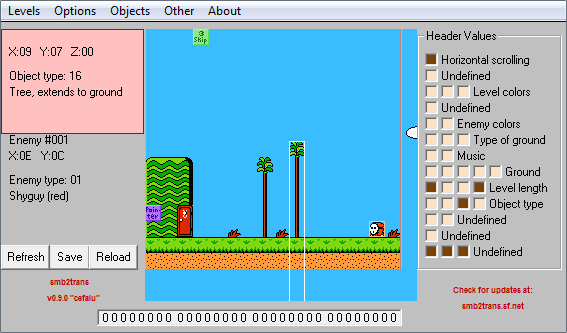 So, the stuff on the right modifies stuff like whether the level scrolls horizontal or vertical, what color scheme the map is, what music plays on the map, etc.. How does it work? Well, it's basically a combination of boxes ticked. Have the first one empty but the second one ticked does this, having the second and third ticked but the first and fourth not does that, and WHY THE HECK WAS IT MADE SO COMPLICATED?! Would it really have been that difficult to just give it a menu with clearly visible and understandable options? Well, actually, they do. In a separate menu. And unfortunately that still leaves several of the checkboxes still needing to be checked in some combination.

What about map creation? Well, it's a mixed bag. Like I said, you do place pieces much like you would in RPG Maker. The problem is, it's not a tile-by-tile system. Let's start with the ground. You know those checkboxes I was talking about, where different combinations of checks do different things? Well, this is how the level's ground works. You gotta check them in a certain way so that you can use some prefabricated arrangement. And if you wanna change it up midway through a map, you gotta use a special marker with a certain property number.

Next is object placement. First off, there's one huge problem with this editing system. If the map gets saved, it won't let you add more objects or enemies than what is already on the map. So no creating part of a map, saving and testing, then coming back to add more. And if you switch to another map without saving, you lose any work you did on that map. You gotta do it all in one sweep. Or at least, fill it to the brink and delete the unnecessary stuff when you're done. Oh, and by the way, there is no Test Play feature. You'll need a separate program to try out what you did.

Now, continuing on, you tell the program to add an object on the map. Here's the next problem. There is no menu to choose the specific object you want. Unless you know the number of the object, you gotta scroll through all possible objects using the + and - keys after you place the object down. Objects range from POW blocks to vegetables, to mushrooms for Subspace, to coins that can be plucked up outside of Subspace, to those green hills you see throughout the first level. Yeah, those hills come in pre-made sizes, too. No drawing them up. Fortunately their basic height is really tall so it's mostly a matter of picking the right length of hill and lowering it into the ground.

Enemy placement works pretty much the same way. Like I said, you could place bosses like Fryguy in the middle of levels, non-level boss versions that don't do anything if defeated. Alternatively, there are a few interesting enemies that can be used as level bosses, like those shyguy-riding cannons, and POW blocks???

Yeah, despite its shortcomings, the game does hold the possibility of really interesting level design that the developers of the original Mario 2 were too afraid to try. And there was indeed a person who made use of some very interesting gameplay gimmicks using this editor, along with the usual glitch abuse:

Okay, after watching those videos, I'm sure you might be thinking, "Okay, this can actually do some neat stuff, and it might be worth enduring the tool's shortcomings to make something like this." However, I left out a couple critical details that ultimately made me decide not to tackle my own version of Mario 2. First off, you know those conveyor belts found in the last level of the game, Wart's castle? They are not a readily available object to place. It seems that some special marker has an effect on whether one of the objects turns into a conveyor belt or not, and I could not figure out how to make it work at all. The best I could do is copy the level data onto another map and modify the rest of the map to how I want it. Oh, but that's not the worst of it.

Let's talk about doors. In the RPG Maker games, when you want a door or a spot to move the player to another map, you bring up the teleport "move location" option, tell it what map to go to, give the coordinates of the map, done. Well, fans of the original Mario 2, you notice how in those videos, despite how different the rest of the levels are, the entrances and exits were essentially left in the same places? Well, the reason for that is simple: with SMB2 Transmogrificator, programming the doors is done in a rather convulted fashion. Here's how it works:

You place the door on the map. The door creates a special marker called a "pointer" (or you create your own pointer). Still with me? Okay, now for the tricky part. Where the door leads is determined by these three things: the X coordinate of the pointer in the "page" of the map, the page X coordinate of the door, and the property number given to the pointer. And there's no help file anywhere I can see that explain just how these work. The only thing I managed to figure out is that where on the next screen the door leads is basically the mirror side of the screen (ie, if you go through the door on the right edge of the screen, you'll be placed on the left edge of the screen, if there's a door waiting for you; otherwise you'll just drop from the middle of the screen). How the pointer's X coordinate and property number work, I have yet to figure out.

If you really want to go through with it, I'm sure you can figure this complicated stuff out through trial and error and create your own version of Mario 2. Keeping in mind that it will be just as lengthy a process as creating an RPG Maker game, and eventually you'll be able to make your own platformers on Enterbrain's new Action Game Maker, anyway.

Admittedly, the prospect of having some really nifty puzzles and random gimmicks in my own version of Mario 2 might actually keep me dabbling in the program a bit, but I'll probably stick with the more streamlined RPG Maker series. Oh, and as for "Lunar Magic", the Super Mario World editor? I haven't tried it out much, but it seems much more user-friendly than SMB2 Transmogrificator (man, that's a mouthful!), which may explain why it's the most popular Mario hack to use. But you still aren't going to draw the ground with it. And there's still no Test Play. 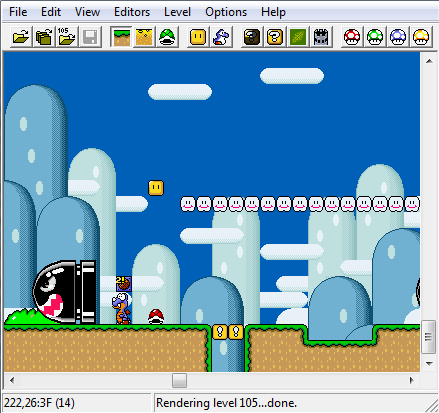 I know this is old, but just wanted to say that Lunar Magic does have a test play function today. You need to install a separate plugin for it thought
< First | Previous | 1 | Next | Last >