Based on screenshots, RPGT4 was similar in design to our RPG Maker 1, but featured some nifty stuff such as variables, SNES-quality graphics, side-view battle system and summon spells. And when us avid RPGM users found out what we were missing, we went crazy. We want it. A lot.

This article is my own personal way of showing support for an RPG Tsukuru 4 localization. In it, I will detail the possible forms RPG Tsukuru 4 could appear here, if it did, and the pros and cons for each possibility. It is all speculation on my part, and I may be misinformed in some respects, but I hope you will find it interesting enough a read.

RPG Tsukuru 4 originally released on the first PlayStation. That'd be the most obvious choice for Agetec to bring RPG Tsukuru 4 to us on, as it'd then only require the localization. It'd also be cheap to bring over, what with PS1 games having long been out of production and outclassed by PlayStation 2 and 3's media. But there are its downsides. For one, PS1 memory cards have also been long out of production, though they can still be found in online stores, and RPGT4 is a bigger memory hog than RPGM1. Less of a problem if you own a PS3, though, as you then have virtual memory cards. But there's also a restriction created by Sony: you need to release a certain amount of copies of a game for them to allow the release to take place. Whether this quota is required for PS1 games anymore, and how much it would be for RPG Tsukuru 4, I have no idea.

A more difficult task would be to port RPG Tsukuru 4 as a PlayStation 2 title. The advantage is obvious: if Agetec worked at it, we could make use of a lot of memory off of the PS2 memory card. Consider that RPG Maker 2 and 3 take up over 2MB of data. A normal PS1 memory card only has 128KB. If we were allowed 2MB to create an RPGT4 game, it'd prove incredibly unlikely that we'd run out of memory. PS2 can certainly hold more memory (a bigger game) than PS1 could. And it wouldn't be the first time Agetec has fiddled with the coding of a game to add new features. The question then arrives, how difficult would it be to port it to PS2? Would it have to be recoded, or is the PS2 language similar enough that you'd simply have to tell it to recognize the old code and it will? If it had to be recoded, it'd be very unlikely that it would get ported to the PS2. And it would have to be on a silver-backed disc, despite it being small enough for a cheaper blue-backed disc. Because we all know what happens with those blue-backed discs. *coughdiscreaderrorcough*

Perhaps the best possibility would be to have it as a downloadable game in the PlayStation Store. Ignoring the possibility that a downloadable game would still require it used the PlayStation 3's code (which would make the scenario unlikely), it would allow Agetec to release RPGT4 without having to spend money on physical production, helpful considering there's no telling how well it would sell. Agetec would also get the attention of those who enjoy browsing the PS Store for new and interesting things. And if not the PS3, being downloadable to the PlayStation Portable would be an interesting possibility. There are already some PS1 games playable on the PSP, so it is a definate possibility, and it would certainly be a dream come true for some avid RPGM users, to be given the opporunity to work on their game on the go.

Speaking of PS3, one must also consider whether RPG Tsukuru 4 would be backwards-compatable on the console. Some may also wonder if Agetec might bring RPGT4 to the Wii or Xbox 360, though I personally find this unlikely, as harsh recoding or difficult emulation would certainly be needed. But no matter which system RPGT4 released for, I'm sure many of us would snag it in a hurry. After all, we're overdue for a new console RPG Maker. We just need to hope that Agetec agrees.

But unless that happens, you'll have to settle for just videos and screenshots. So here's one of each: 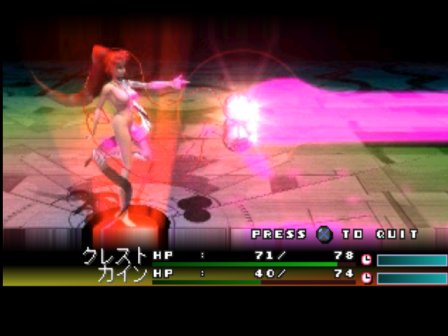