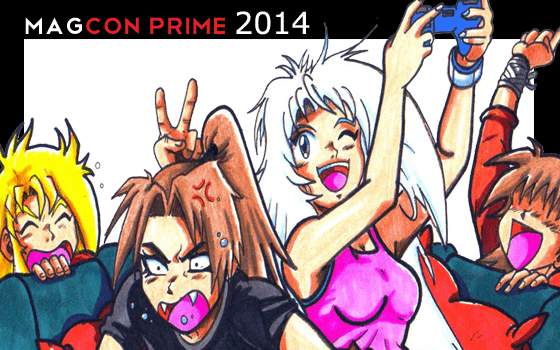 This is your stop for all things MagCon Prime 2014!

We will be live-streaming via Google Hangout (likely) or Twitch (possibly) or some other form of streaming service during the times indicated on this schedule. You will be able to interact with us on our wonderful vacation!

More after the jump.

Videogame Decathlon - streaming
The Videogame Decathlon is back once again this year with 10 brand-new games and challenges for our attendees to brawl over. There are plenty of prizes to win as well as a special prize for the Decathlon Grand Champion, as always. Hosted by Ixzion and Lantis, even though he doesn't know what the games are.

Group Let's Play/Let's Race - streaming
We are going to do a live Let's Play or Let's Race at the convention. What is it going to be? That's a surprise to everyone!

Group MagCast - streaming
Started last year by Fayorei, the MagCast will have another special edition at MagCon. It will have a new format and will be hosted by Ixzion.

The result is someone is gonna take a nice dose of Sunny D.

Random Skits - non-streamed
You know we're going to have some skits, right?

Magic the Gathering - attendee-only
Are you a giant nerd? Of course you are, you're here! We play PLENTY of MTG at MagCon, so don't be the one who says "I shoulda brought my cards"!

Various Board/Card Games - attendee-only
We have plenty of multi-player board and card games to keep us busy during the off hours of the convention, including games like Munchkin and Cards Against Humanity.

Dinner and a Movie- attendee-only
As has become tradition, we will once again watch a movie and dine together on the last night of the convention. This year's selection: Bad Lieutenant: Port of Call New Orleans.